Earlier (technically last night), I was playing around with this old radio and crappy multi-effect, and I came across some (local? regional?) Christian station.

Nothing particularly outrageous, just some freaking ancient woman on a pre-recorded broadcast from last Saturday talking about typical shit like the end times approaching and what not... Just more audio for people to mangle!

http://drop.io/welcome_to_church_chat#
(the "preview" may not work as it's been loading for ages, but I was able to successfully D/L the audio even though I can't preview it yet).

There's lots of noise, and the broadcast is buried in it the entire time... I basically had to ride the tuner wheel because the broadcast kept getting lost to interference, and I constantly needed to adjust it.

At roughly 8:40, there is a cut where I checked different stations and then eventually went back to the jesus lady (it would've been almost 20 minutes if I left it all in).

At the very end, I turned off the radio, and then I started hearing a lot of loud staticy noises which I don't know the source of...

i'm going to hijack your thread since i did this exact same thing last night. except instead of an actual radio i recorded the sound of my bass amp while it was turned off but still plugged into a preamp. i missed your post the first time around so i don't know what yours sounds like, but mine is ESPN/Fox News recorded for about an hour and then dubbed up like crazy for an end product of about 8 minutes. 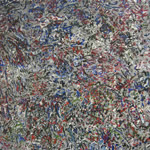 i listened to rays radio track, was real creepy, like something you hear late at night when youre alone and something bad is about to happen...gordon, yours is next, then i will vote

hey, i have a radio track too, maybe i will throw down...

these arent new, so you may have heard them before, both from short-wave broadcast...

yeah that was on the very first disc you ever sent me.

you should know by now that my thing is total sensory overload!

I do wish I had the power to make people vomit with my music...